Happy Monday!  Last week we talked about the four pathways of elimination that need to be working efficiently for us everyday. If they aren’t, then we get inflammation and chronic conditions like hormone dysfunction, fatigue, skin conditions, ect.  I hope you are all enjoying this month, and as always, if you have topics you want more information on, let me know!

This week we will briefly talk about how your brain detoxes and why this is so important for our health.  As well as tips to increase it’s productivity so that we can optimize our brain function and detox pathways.

We talked last week about the lymphatic system and it’s importance in keeping it flowing.  We have a similar system in our brain it’s called the glymphatic system, or the “brain drain”.

This system was only recently discovered in 2012. It’s uses the cell’s mitochondria (energy system) to remove cellular waste from the brain.  The cerebral spinal fluid (CSF) in the brain is what is responsible for draining toxins from brain.  The brain has no lymphatic system, just the CSF fluid.

The kicker here, is this system is especially active during sleep!  That being said if you enhance the mitochondria’s ability during sleep, you will turbocharge this maintenance system and get more cleanup in less time.

In 2013 as well, researchers found that something called “autophagy” is required for healthy brain cell mitochondria.  This is a natural process called autophagy (literally “self-eating”), and it’s the bodies system of cleaning house: Your cells create membranes that hunt out scraps of dead, diseased, or worn-out cells; gobble them up; strip ’em for parts; and use the resulting molecules for energy or to make new cell parts.

It’s like an internal recycling program.  We get rid of faulty parts, stop growths, ect.  When the scientists monitored rat specimens who had difficulty with autophagy, they were fatter, sleepier, had higher cholesterol and impaired brains.

How to increase autophagy to boost the cell’s mitochondrial function:

1. Exercise.  “Regular exercise is the most popular way that people unintentionally help their body to cleanse.”

2. Fasting.  Although I don’t usually recommend skipping meals, occasional fasting is actually beneficial. Practitioners usually forgo food for anywhere from 12 to 36 hours at a time, making sure to drink plenty of water. (You might also want to limit activity to gentle yoga or stretching.)

3. Lower your carb intake.Ketosis, is an increasingly popular diet among bodybuilders and anyone seeking a longer lifespan. The idea is to reduce carbohydrates to such low levels that the body has no choice but to use fat as a fuel source instead.

Ketosis is like an autophagy hack. You get a lot of the same metabolic changes and benefits of fasting without actually fasting.
Keto diets are super high fat (good fats): Between 60 and 70 percent of one’s overall calories should come from fat. (Lots of steak, bacon, and peanut butter shakes are a definite bonus for the keto crowd.) Protein makes up 20 to 30 percent of calories, while carbs are kept below 50 grams per day.

So, increasing good fats, moving and intermittent fasting improve this system.  But what about getting it flowing directly at its source?  What about actually changing it in the brain where it flows in and out of?

Craniopathy care has been proven to increase the CSF flow in the brain and in the entire system.  When there is pressure on the brain from the bones of the head, this fluid cannot maintain its flow. 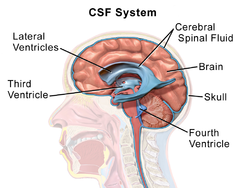 Additionally, as I mentioned previously, this system is active entirely during your sleep.  So if your sleep is hindered, or you aren’t getting adequate deep sleep you won’t be detoxing your noggin and body very well.

Sleep can be helped in many ways.

1.  Getting cranial care
2.  Supplementation, including minerals and herbs
3. Exercise
4.  Reducing EMF exposure.  No tv or cell phones in the bed room.  Turn off your wifi in your home every night, and make sure there’s no light in your room.  Completely dark room allows your brain to produce melatonin.  EMF exposure actually calcifies the pituitary which releases melatonin.
5.  Essential Oils and CBD. Certain oils can be really helpful for creating calmness and allowing sleep to happen.

This week I wanted to chat a little bit about some research I’ve been looking into, and getting all your comments as to what you think!

In the nutrition world, and natural healing world, we have been taught to use fish oils Omega 3 (mainly), 6, 9 for decreasing inflammation and increasing good fats for cellular membranes, hormone production ect.
In my practice I use omegas for hormone work, any chronic injuries with inflammation, and other ailments.  Most everyone goes on a fish oil for a great foundation along with a whole food based multivitamin, because our food sources and soil are so nutrient deficient.

However, there has been more and more research coming out, that fish oils really aren’t all that “fishy”… or great for us because of the type of oil called “adulterated” oils.

You have 100 trillion cells in your body and all of them have a cell membrane — and over 30% of the “material” from which those membranes are made are polyunsaturated fatty acids (i.e. oils).

There is a superiority of plant based oils.  Parent EFAs (essential fatty acid) which come from seeds, was coined by Dr. Brain Peskin because so many people use EFA incorrectly as a derivative.  There are two types of  essential fatty acids: Omega 3 and omega 6, and they HAVE to come from food, meaning we do NOT make them.Omega-9 fatty acids are from a family of unsaturated fats that are commonly found in vegetable and animal fats. These fatty acids are also known as oleic acid, or monounsaturated fats, and unlike omega-3 and omega-6 fatty acids, omega-9 fatty acids can be produced by the body, which means the need to supplement is not as important.

50% of the 100 trillion cells we have are made of FAT. 25-33% consist of parent oils, it is the structure of every cell we have.  It is also the mitochondria that makes our energy.

Parent essential oils are essential meaning we cannot make them, and are termed LA and ELA( Linoleic Acid and Alpha Linolenic Acid). Fish oil has compounds called DHA and EPA which are DERIVATIVES, meaning they come from the parents.  So, if you have the parents, your body makes derivatives as needed.

PEO’s support appetite, beauty, anti-inflammation ect, they make the cell.  You can be overweight and not diabetic, and vice versa, which has everything to do with the cell membrane.  The cell membrane allows insulin and any hormone to go back and forth.  If you have a compromised cell membrane, then oxygen, hormones ect are impaired.

The answer is oxygen.

But, where in the body does that oxygen need to go to sustain life?

In a study in 2008 individuals who took the the parent omega 3 had less heart disease, while those on fish oils did not have much benefit.

In a study in 2013-men with the highest DHA, EPA levels had the highest prostate cancer, the reason was because of oxidized omega 6.  By bringing in the parent OMEGA 6, this decreases the chances significantly.

In 2009, they reported that they were all wrong about omega 6, Arachidonic acid saying that it is bad.  PARENT omega 6 has powerful anti-inflammatory properties.

WARNING.  In America, you are having highly processed foods, and lack of fully functional Omega oils, unless you are eating whole food raw vegan diet, which most aren’t. And I don’t recommend as we need the good fats in our meat sources as well.

Unfortunately, in our modern world, most people consume denatured polyunsaturated fatty acids… that is oils that have been changed from oxygen-attracting to oxygen-resisting… in pursuit of long shelf life.

We need a conservative amount of omega 3 but more omega 6.  It has to be cold pressed not adulterated in regards to the research. Even the inside layer of our arteries are omega 6! The key is a supplement with more parent omega 6 than omega 3.

PGE1- the body’s number 1 anti-inflammatory is through the Omega 6 pathway.
Prostacyclin makes platelets not stick to each other or the artery, this is the omega 6 pathway.

“Nobel Prize winner Dr. Otto Warburg stated the cause of cancer was inadequate cellular respiration (oxidizing of fuel in the presence of oxygen in the mitochondria to make energy) and how  modern processing of vegetable oils for long shelf-life leads to denatured oils that are resistive to the transfer of oxygen (this is what oil manufacturers want so that oils don’t go rancid). These denatured oils incorporate into our cell membranes and resist the flow of oxygen into the cell, setting the stage for our modern epidemic of cancer.”
What transfers the O2, the cell membrane! The omega 6 in that cell membrane.  If you are having cooking oil, baking, frying it, you are going to increase your chances for cancer.  Inflammation takes all your oxygen.   You can get cancer in any cell that is oxygen deficient!

We know cancer can be caused by many things not just vegetable oils, but it is interesting that this could be a HUGE cause as well, as we know oxygen depleted cells love cancer.

Plant based oils are oxygen magnets, they allow transfer of oxygen into the cell membrane, which is critical and vital for us.

“Having ample oxygen in the cells of tissue is at the top of “best health insurance practices” anyone can have. And, all it really takes is switching one’s oil consumption from oils that degrade cellular oxygen content (i.e. today’s, grocery-shelf vegetable oils) to oxygen-friendly oils, called Parent Essential Oils (these oils are Alpha-Linolenic and Linoleic fatty acid containing seed oils that are extracted without damaging heat or damaging processing techniques, and protected from oxidation).”

Processing fats is also huge here, which depends on the liver and gallbladder.  Eating a high fat low carb diet is really critical, but you have to be able to process that fat as well, which might require supplementation.

I hope this was eye opening for you, as it was for me, being that I will be switching most of my protocols from fish oil to more plant based parent seed oil.  We should at this point already all know vegetable oils are very bad. But, for those that don’t I hope this spread some light for you.  Be careful when jumping on the fish oil wagon, as with everything science is changing, so we must shed light on the good and the bad.