Happy Monday Everyone!  I hope you’ve all enjoyed this month’s topics so far about brain injury.  Last week we went over brain injury and the connection with your bite.  If you missed it don’t worry, you can head on over to my website and catch it!

This week we will be digging deeper into the part of brain injury that gets kind of shoved under the rug, and that’s the emotional aspect.

PTSD for example: An estimated 70 percent of adults in the United States have experienced a traumatic event at least once in their lives and up to 20 percent of these people go on to develop post-traumatic stress disorder, or PTSD. An estimated 5 percent of Americans—more than 13 million people—have PTSD at any given time.

PTSD is not just found in our military, although it is extremely common.  So, being so common you’d think it would be talked about more, or at least more treatment options.

However, it’s quite to opposite.

Especially in our veterans and military care, many are not even given proper examinations and are just medicated as the only option.

However, in my practice I always want to find a source.  And through my research of the brain, I’ve found time and time again research connecting PTSD, mood dys-regulation and the such to previous head trauma.

One large study that look at at 2300 veterans 3-4 months after returning from IRAQ for 1 year. They found that:

In my practice, since I ask all the questions, for anyone either young or old with any mental health concern or issue, head trauma is ALWAYS my #1 question.

Because of this research and lots more just like it.  Head trauma causes imbalances within the whole body, including the emotional system.

So shouldn’t that be the first question doctors ask when vets come in with PTSD like symptoms?  Or what about even just headaches or pain?  I would think so..  but unfortunately it’s not, and that is why more education is needed.

Chronic in pain in general can also cause mental/emotional issues to arise.  Pain and especially chronic pain messes with the head.  It interferes with what we can do.
Which then causes emotions to arise because of the limitations it produces.

Taking chronic pain away naturally in itself can relieve a good amount of emotional issues that have arose.    This is because when the brain and nervous system are constantly bombarded with pain signals, stabilizing the emotions isn’t a priority.  It just isn’t.  Regulating your neurotransmitters and hormones isn’t a priority when it has to constantly focus on pain, heart beating, lungs pumping, ect. When you start alleviating some of that pain, you free up your brain to focus on those emotional issues.

But, what if you can’t find the source of pain?  This is often the complaint of individuals that find their way to my practice.
They’ve tried conventional medicine, they’ve tried chiropractic, massage, acupuncture, PT……

Well, did they even ask about your head?  If they did and you had a concussion or brain injury (don’t have to hit your head), what are your options?

Maybe some of the above mentioned can be utilized if the provider is open minded.  But I find the actual brain environment is NEVER addressed.  Craniopathy care is not very known.  But normalizing that movement is HUGE for that chronic pain and dysfunction.

Once we do this…

I’ve seen time and time again in my practice that emotional traumas start coming up.

Why?  Well cranial care in general opens up and frees the brain to focus on other aspects that need healing.  Emotional traumas are one possibility.

This is where the technique I utilize in my practice called NET (neuro-emotional technique) comes into play.  Utilizing this after doing the cranial care allows the patient’s thought processes to start changing from “always have” to “had in the past, but now can heal” for example.

These are REAL  treatments for these types of conditions.  These aren’t ALL the treatments though.  I still recognize and appreciate the other benefits and needs of mental healthcare professionals absolutely.

I just think first taking care of the brain and though processes is and should be the first priority.

In other ages, say children with emotional issues, head trauma can come even just from the birth process, or any head trauma they had otherwise.  Hitting their heads, sports, ect.  If you notice a mood change, check the brain and nervous system first and calm it down.

For other PTSD related issues, the treatment is still the same in my office.  Find the cause.  What is the trigger?
Can we change those though processes?  Can we balance the brain more to handle it? What else is causing inflammation in the brain?

We will talk about nutritional recommendations for brain injury and healing next week, so stay tuned warriors.

Oil of the WEEK.

The oil of the week this week is Copiaba.

Instead of focusing on just one species of Copaifera, dōTERRA recognized the power behind a blend of several species to ensure the highest quality and potency.  Resin from Copaifera reticulate, officinalis, coriacea, and langsdorffii are meticulously harvested and combined to create a synergistic blend.  Not only does this increase the therapeutic power of the oil, but it also enables the different species to offer their best components to the blend for one power-packed essential oil with high levels of the primary constituent beta-caryophyllene.

If you will allow me to tap into my science nerd for a moment, I can break down the basics for you.

The main chemical component of Copaiba is the cannabinoid beta-caryophyllene, or BCP, though it does NOT affect the body like the psychoactive cannabinoids in marijuana.

We all have endocannabinoids in our bodies that communicate with receptors.  They balance a wide variety of tasks to keep our body balanced both internally and externally.  From immune and inflammatory response to memory recall and appetite, these endocannabinoid receptors are busy supporting the body to keep us in top condition.

In recent years, scientists have studied these cannabinoids for a way to harness their neuroprotective nature and sustaining benefits.

They have identified two subtypes – CB1 and CB2.  Theres a lot more to discover!

CB1 occurs in the nerve cells of the brain to influence memory and pain regulation, but, when triggered, does produce the psychoactive effects we commonly associate with a “marijuana high.”  This has led scientists to search for a solution that does not create the “high,” most often in a synthetic version.

And lurking in the Amazonian rainforests was Copaiba rich with beta-caryophyllene.

CB2 receptors work within the immune system where they affect white blood cells to support healthy immune function while soothing and relaxing the body to reduce inflammation.

BUT…and it’s a huge one…when triggered, they do NOT have the same psychoactive effects on the body.

The primary constituent of Copaiba – beta-caryophyllene – can bind to the CB2 receptors, thereby supporting a healthy nervous system as well as supporting immune function.  While it offers similar support as its essential oil counterparts – Black Pepper, Clove, Melissa, and Rosemary – its ability to bind to the CB2 receptors allows the body to find relaxation and soothing without the psychoactive side effects.

And dōTERRA Copaiba EO boast over 60% of beta-caryophellene!

Based on this research concerning the CB2 receptors, scientists have found Copaiba to be an amazing alternative to synthetic versions of pain relievers, especially for those suffering from chronic conditions. Some even say that it may top Helichrysum in its ability to naturally relieve the body and reduce inflammation of many different kinds.

Combining it with Clove and a carrier oil creates an amazingly powerful topical spot treatment or massage blend for those suffering from chronic pain.

One of my favorite uses for Copaiba is head and neck tension relief.  Combining it with gems like Peppermint, Lavender, Marjoram, and Frankincense creates an amazing blend that rivals any OTC or prescription drug on the market.  Try this recipe if you deal with tension on a regular basis:

Also great for teething in infants! 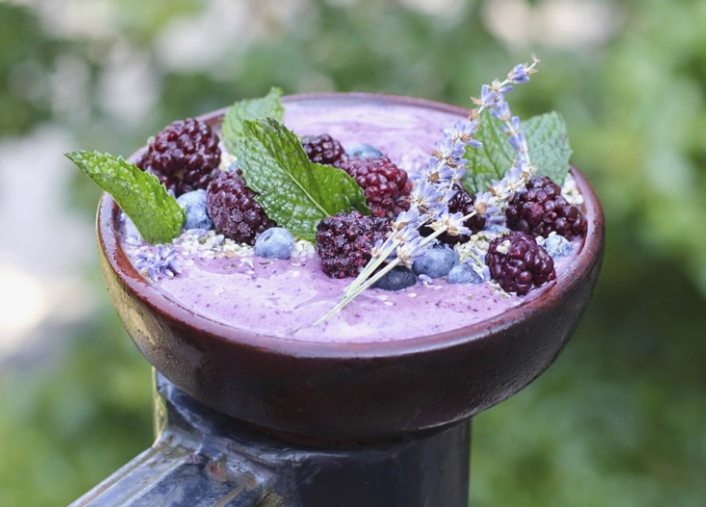 Eat berries every day. Berries are full of antioxidants which help protect your brain. They are also high in fiber, lower on the glycemic index (so they don’t cause inflammation), and a wonderful healthy snack. Try this easy berry smoothie to work more berries into your diet!

Place the cashew milk and spinach in a high-speed blender and puree until smooth. Blend in the protein powder. Add the remaining ingredients and blend until a thick and creamy consistency is reached. Pour in additional nut milk, if necessary. Top with berries, fresh mint, hemp seeds, and additional lavender.

Wishing you all a safe and happy week,